Smart Cities: How Drones, Satellites, AI, and Image Recognition Can Make Them A Reality 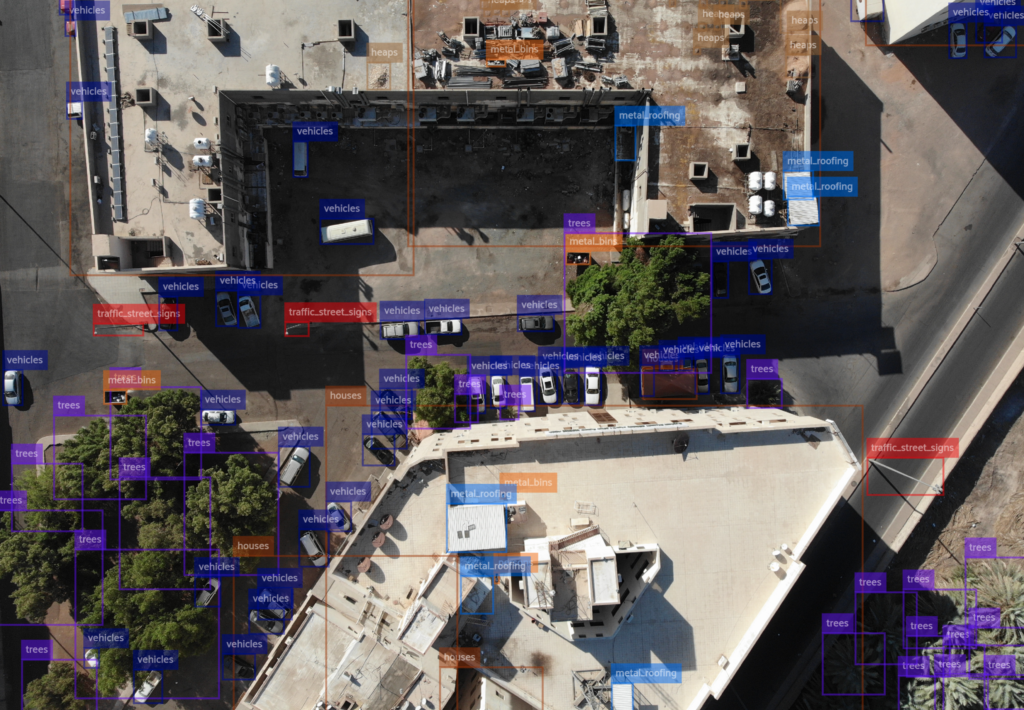 Traditional ways of monitoring modern cities often prove to be inefficient. Due to a huge extent of the necessary manual effort, they require a lot of resources that a city may lack.

Besides, what needs to be done by hand is prone to errors.

But advances in AI and related hardware solutions can change the situation soon. In this post, we want to focus on image recognition.

How Does It Work?

Before image processing comes image gathering. This can be done by either drones or satellites.

A drone can be equipped with a hyperspectral camera. It can store the footage locally for later transmission, but there are models that allow live streaming. Images obtained from both drones and satellites can be analysed by an AI image recognition algorithm to detect certain patterns.

Well, does it sound like an additional cost? Let’s look at the advantages before jumping to a wrong conclusion.

Advantages Of Drone And Satellites For Area Surveillance

First, both drones and satellites can help in inspecting any problematic areas and objects at any altitude, but drones can also look into holes not visible from the orbit or inspect the object sideways. Opposite to a manned team, both do not have to overcome any physical barriers.

Second, drones and satellites can cover big areas. At a later analytical stage, this fact allows to make more precise conclusions and leads to better decision-making.

Third, drones are easy to deploy. They are always ready to start, as long as their batteries have enough charge. Satellites are already in the sky, and multiple organizations provide access to the images e.g. through an API. There is no need to send a team to capture some areas as they are doing it on a regular basis.

It is worth mentioning that the resolution of the images captured by a drone, depending on elevation, allows to detect even leaves on the trees as well as bricks and sticks on the ground, while satellites can detect only macro objects like cars and trees or bigger ones.

Consequently, drones and satellites help to reduce costs and increase the efficiency of city monitoring. The only question is what you do with the images that you get from them.

Drone- and satellite-made footage opens a door for creativity. We just want to mention a few use cases that we had to do with or find particularly promising.

The main daily headaches of every municipality are roads and water networks. They both cover huge distances and play a crucial role in city life. Patches and leaks can ruin the balance and should better be detected before they start irritating the citizens.

At AI Superior, we helped a few customers to implement a geospatial analytics solution for identifying weak spots on the road that need repair. This solution uses drone and satellite images that are processed by AI algorithms. Our AI categorises physical and visual objects that were filmed helping operators to spot bad issues quickly.

This approach can also be helpful for inspecting road marks making sure that the necessary ones are in place and the road traffic won’t be hindered by their absence or bad condition.

City services may be also interested in a dynamic picture of their roads. Knowing traffic intensity allows to plan new roads more efficiently, rerouting or splitting traffic to prevent traffic jams. That’s what our customers value in our solution for road traffic analysis.

Drone and satellite images and video footage help to monitor accidents and their consequences, such as oil leaks on the roads, this could allow authorities to react quickly and provide warnings to drivers heading in their direction.

Depending on the local legislation, drones can be used for reading license plates and collecting other evidence.

A broader use case would be general security issues, such as monitoring big assemblages and providing assistance to the ground personnel.

Images taken from above and delivering a bigger picture help to direct the effort to the spots that become particularly dangerous, for instance, where a rally nears a bottleneck and people should slow down to prevent too much pressure on those in the first rows.

Stadium events can become more safe with a drone-based live observation. As in the previous case, image recognition helps to quickly identify emerging knots in the crowd, where people can be pressed together too tightly, and prevent negative consequences.

Apart from public security, law enforcement remains a big challenge for many cities. Although drones and satellites cannot solve all issues, pictures taken from the sky can help in two cases.

Not all construction sites are left in a compliant state. More often than not, contractors may be reluctant to clean up construction materials, old buildings’ leftovers, or other trash they generated. AI Superior has created a solution for construction debris detection that relies on images gathered by drones. It not only helps to avoid manual inspections by identifying a possible spot but also classifies the trash allowing to estimate the damage and costs of its elimination.

Unauthorised construction is another problem. The civic authorities may choose satellite-based monitoring – to stop illegal activities. Images obtained from satellites can be relayed with the approved plans for a certain area to detect unauthorised construction. This kind of surveillance is not universally acceptable in all countries as legislation may vary and be more restrictive in some regions.

Indeed, smart city management does not only involve catching public law offenders! More pleasant and peaceful use cases are possible.

Cities need plants, especially a lot of trees to keep the air fresh and their surfaces attractive and cozy. Observing trees’ and bushes’ growth is another traditionally manual task that can be easily outsourced to modern hardware and AI solutions.

Drones are capable of generating high-resolution imagery alongside with measurements that previously had to be conducted on the ground. Land managers can quickly decide which areas or certain plants may need additional care and plan fieldwork accordingly.

Want to build and implement a smart city solution by yourself? You need to be aware of the main prerequisites.

Of course, any free sources would require more effort on your side to collect the data you need and make it “analysable”. Make sure that you build or get a fully automated solution, otherwise, the advantage of not doing any manual job may be gone.

The supply of computer vision solutions grows exponentially. The main difficulty is how you make a choice and then make use of what you bought. Most of the time, you’ll need a person who understands at least some basics of image recognition. Although the majority of software providers build very intuitive user interfaces, you’d better understand what it does under the surface to avoid making wrong conclusions and being able to do quick troubleshooting with only your internal resources.

Not to mention that this kind of software needs a machine with sufficient computing power to run. Many solutions can be deployed in a cloud but, in this case, you’d usually have little influence over certain technical aspects. Cloud deployment may also raise data protection concerns.

Is It Still Worth Trying?

The main effect of using AI and image recognition techniques in smart city management is increased monitoring efficiency. As you reduce the amount of manual effort and move toward automation, the maintenance costs decrease, freeing more financial resources for capital investment.

The time spent to detect any issues drops allowing you to fix them before they cause a greater inconvenience or further cost.

But, most importantly, you can achieve your main goal: a beautiful smart city with happy inhabitants.

Data analytics for small businesses: How data science can boost your company

AI in the fashion industry: Use cases for applying machine learning in fashion